In David's absence I looked this one up and confirmed my answer to be correct. In a rare screen event, 'The Beguiled' (1971) sees Eastwood's screen character die - poisoned with mushrooms. He also dies in 'Honky Tonk Man' (1981), his character being on his last legs with TB as the film opens.

I think I have heard this before and I "think" its The Duellists?
Top

It is indeed, and here's the photographic evidence, with French hussar, Harvey Keitel skewering ('tho not fatally) the son of the Mayor of Strasbourg... 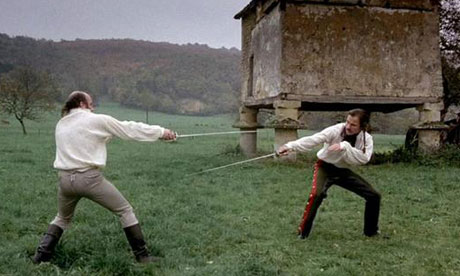 The costumes & hairstyles in this film are the nearest perfection I've seen in a historical movie.

Which movie had the tagline "They're Here To Save The World."?
Top

(Unless MIB has the same tagline)
Top

DanielFullard wrote:Which movie had the tagline "They're Here To Save The World."?

25 odd years on and still Ghostbusters gives me nightmare's and it's not for the reason you think..

- Anyway he's goes a mix of film and music.

Only one James Bond film theme soundtrack has reached No.1 in the charts either here in the UK or the US Billboard charts? Which one?
Top

Users browsing this forum: No registered users and 2 guests